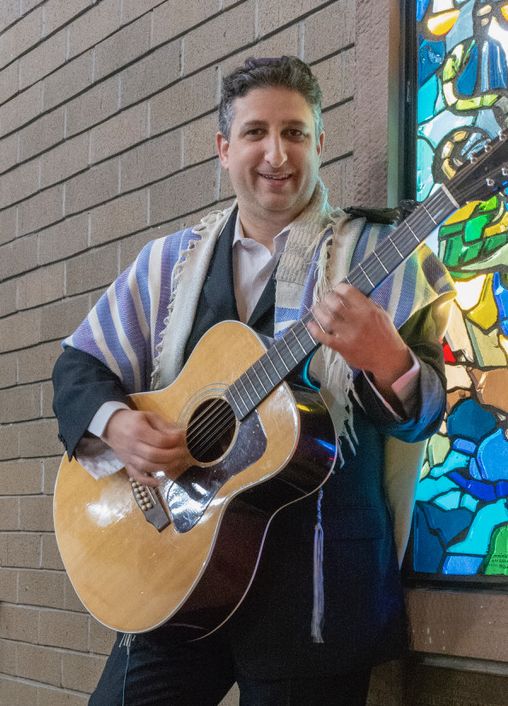 As the Cantor at  Mosaic Law Congregation in Sacramento and multi-instrumentalist, Cantor Ben Rosner brings a dynamic approach to Jewish  music, synagogue life, and pastoral care.

Pastoral care is of great importance to Cantor Rosner. Serving as main clergy while Rabbi was on Sabbatical two to three months out of the year, he often officiated lifecycle events solo while fielding calls, care meetings and visits. In anticipation of the synagogue Rabbi retiring, Cantor Rosner partnered with healthcare, social work, clergy, staff and caring lay-leaders through classes and networking to improve on how the community could better serve the spiritual, physical and mental well-being of its members.

Cantor Rosner immediately and creatively met the challenges of the COVID-19 pandemic, leading the synagogue’s transition to fully-remote services and programming. Cantor Rosner utilized Zoom and Youtube Streaming service to ensure that services offered by Mosaic Law Congregation would be accessible to its congregation.  He encouraged continued participation of people of all ages, teaching the community’s Rabbis, and many others, to use these platforms. While Torah readings were suspended at the beginning of the pandemic, Cantor Rosner encouraged the community to flexibly reinstate Torah Readings over Zoom.  He led and scripted Shabbatot,  High Holidays, Passover Services, as well as Virtual B’nai Mitzvot and Havdalot, which were fine tuned with the interim Rabbi.  He produced many music videos with an exceptional video editor including videos of laypersons chanting the books of ShirHaShirim, Ruth, Ecclesiastes and Eicha.  Cantor produced a Virtual  S’lichot service, which was aired nationally by the Cantorial Assembly to all members of the Conservative Movement.

In preparation for High Holidays, Cantor Rosner was cognizant of safety concerns in choral singing. Inspired by Eric Whitacre’s “Virtual Choir” projects, Cantor Rosner privoted and trained the choir, with the help of section leaders to record their parts from home for inclusion in virtual services.  In addition, Cantor Rosner collaborated with composer David Friedman  and a Cantor in New York to produce Friedman’s “Achat Sha’alti.” This particular virtual choir piece included over 30 people performing, was viewed on Facebook over 3500 times, and was covered in the Times of Israel. In addition to Cantor Rosner’s flexibility to alter prayer and musical experiences during this time,  Cantor Rosner collaborated with the board and volunteers in creating educational programming online. Together, they originated a twice-weekly Zoom program, “Talk Jewish with Me,” during which community members lead talks about areas of interest.

Cantor Rosner utilizes multiple styles of voice and many instruments including his main instrument, the classical guitar, as well as mandolin, banjo, ukulele, harmonica, keyboard and recorder, to introduce joyful and soulful new melodies, as well as traditional melodies, to the synagogue service on Friday nights. Through Cantor’s efforts in the Mosaic Law Community, he has developed a music program with more than two dozen musicians who participate in multiple ensembles for evening services as well as events. Saturdays at Mosaic Law Congregation,  he leads Shabbat services without instruments.  In addition, he teaches and empowers people of all ages to  learn and participate in all services.

Cantor Roser strongly believes in including people of all ages  in Jewish life.  He has reintroduced Tot Shabbat for the youngest children to Mosaic Law engages young families with monthly Friday night services, and has facilitated the development of  MLC2030, a synagogue group that engages and empowers Jews in their 20s and 30s, an age group that is typically unaffiliated.  Many people have been attracted to services at Mosaic Law Congregation as a result of the Friday Night Live/Shabbat Under the Stars services, which have  also attracted many musicians. In collaboration with the membership committee, he has helped to attract 100 new memberships since 2013.

Cantor Rosner has produced many concerts and services  with guests  and cantors.  He also has a special interest in the Jews from many cultures and produced and participated in Yemenite, Persian, Sephardic, and Mizrachi prayer-services.  In addition to producing concerts with Yiddish and Ladino folk melodies, Cantor Rosner has collaborated with the Sacramento Guitar Society as a past board member to produce concerts/lectures with established guitarists and musicologists. Cantor Rosner also deeply enjoyed the collaboration with a Hindustani singer who is the director of Indian Music School in Sacramento, “Songs of devotion and love in Indian and Jewish traditions.”

Cantor Rosner holds degrees from the H.L. Miller Cantorial School of the Jewish Theological Seminary, where his thesis was “The Birth and Rebirth of Guitar in the Synagogue and A Theory and Practical Application of Jewish Liturgical Music.”  He has been interviewed as an expert and did editorial work on an upcoming article for Acoustic Guitar Magazine on the guitar in places of worship, and he has also collaborated with the editor of Journal of Synagogue Music on an upcoming article  that includes his recording and arrangement of the traditional prayer “Shiviti” for classical guitar and voice. Cantor Rosner also  published an article on “Selective Use of the Guitar as Accompanying Instrument” in the Journal of Synagogue Music. In March of 2019, Cantor Rosner presented in person, “The Unlimited Potential  of Guitar in Synagogue Music” at a symposium on Jewish Music at the University of Chicago through the Kaplan Institute

Cantor Rosner has given many lectures and solo concerts, which include “ “The Practice of Torah Cantillation and its Jewish Law and Grammar”,” Sephardic History and Music”,” Persian Instruments Used in the Movie “Ballad of the weeping Spring”, and “History, Halacha and the Art of Hebrew Calligraphy” as well as others. He has also been Scholar in Residence and Guest Cantor  at other congregations. In addition, Cantor Rosner acts as a consultant for an instrument seller, recording videos of multiple styles of guitar and other instruments for sale.

Cantor Rosner enjoys composing secular and liturgical music.  Some of his compositions include “Hashkiveinu” for choir, which premiered at a community-wide Yom Hashoah commemoration,  “ Oseh Shalom” for guitar at voice and “A Shavuot Piyyut” for choir, both of which premiered at the Shalshelet Jewish Composers Festival in Philadelphia, Pennsylvania.

Cantor Rosner grew up attending service at KAM Isaiah Israel in Hyde Park, Chicago, where he was exposed to the music of Max Janowski, the synagogue’s famed music director. He began playing classical guitar at age 13, earning a scholarship to the University of Miami’s conservatory program just a few years later.  While at UM, he started leading music Shabbat services at Hillel, an experience that inspired him to dedicate his life to Jewish learning and teaching. Outside of the synagogue, Cantor Rosner enjoys spending time with his wife, young daughter, and pet birds.

I must tell you as meaningful and as beautiful as Jesse was on Shabbat, it was your manner in getting Jesse ready that really made a difference. Throughout all of his preparation, you were kind, fun and inspiring to him…you knew when to push and when to give him some room. You really made the [Bar Mitzvah] a memory that will be with us and Jessee for the rest of our lives. We are so glad you were able to join us in the evening and celebrate this wonderful day with us. Thank you again.  … END_OF_DOCUMENT_TOKEN_TO_BE_REPLACED

I admire your musicianship, your God-given talent and your abilities on piano and guitar… I am so delighted those people whose job it was to hire a cantor recruited a wonderful talent with your gorgeous voice, which just flows naturally the minute you open your mouth.

There are many professionals who serve our Religious needs and the obvious strengths of Cantor Rosner, are his integrity, heartfelt Jewish values and willingness be available to undertake both new frontiers as well as follow established traditions. Very few professionals in our Jewish faith can be found to have this great ability both professionally and morally.

Beth Shalom is a wonderful shul, but it can be difficult to feel welcome as a young person without children. Nevertheless, Cantor Ben helped make us feel comfortable and welcome as a kind, friendly, and enthusiastic leader. Both Reuben and I believe that Cantor Ben is a huge asset to the Beth Shalom congregation.

“…I had the privilege of working together with Cantor Ben Rosner for seven years until I retired in August, 2020. As a former cantor, I understand the role of Jewish music as an instrument to inspire and give meaning to people’s lives. Ben Rosner does exactly that. Ben possesses a gift of being a one-of-a-kind creative spirit. He is blessed with a neshama that enwraps you in a warm, loving embrace. His exceptional talents as a musician, cantor, teacher are the essential ingredients to enha… END_OF_DOCUMENT_TOKEN_TO_BE_REPLACED

Ben is a personable and likable young man whose maturity and commitment to our community I respect, and whose behavior is always impeccable and appropriate…possessing genuine charm, he is very well liked and admired throughout our congregation.

All in all, any congregation which employs Ben Rosner as its Hazzan will be most pleased and have a wonderful, caring and talented young man in its midst.

Dear Cantor Ben, Thanks for all you do at Beth Shalom and in the Pittsburgh music community. May you and Alyssa be blessed with peace, joy, and happiness in your life together. Shabbat Shalom! Elisheva

Thank you very much for the enjoyable class that you organized in your home. People had a great time, and the appreciation for what you do was in the air. The delicious refreshments added even more excitement!

Cantor Ben helped me to take the first steps in chanting festival trope,for Shir Hashirim, Kohelet and Ruth, supporting me all the way from practice to the bimah. As a mom who is approaching her son’s Bar Mitzvah year, I wanted to increase my knowledge base. Cantor Ben helped me to do this! He encouraged my personal growth of tefillah, which has resulted in a deeper understanding, and our increased kavanah as a family.